of the endowment fund

We wanted to create an endowment fund for the Maison Bernard to continue the enduring adventure culminating in the creation of an architecture that made its mark on the second half of the 20th century.

This adventure has its genesis in the 1969 encounter between two men, Antti Lovag and Pierre Bernard, each one of them a free and nonconformist personality. Antti Lovag is an iconoclast who has developed an original concept of architecture centered on man, his living space and his needs.

Radical designs flow from the circular structure of man’s behavior and the bubble enveloping his needs. He is an atypical architect in the sense that he lives on his project site from beginning to end in order to experiment its implementation depending on the ground, the landscape, the light. Pierre Bernard was curious about the world and its innovations. He first invested in the automobile industry and built up a company that became the second-largest automobile distribution group in France.

For more than twenty years, they forged a friendship and complicity that allowed them to build an original architectural work together with no other imperative than a shared adventure. Adventure is in fact Antti Lovag’s only program. Before embarking on a project, he sets out its rules: “I do not know how long it will last, I don’t know what it will become and I do not know what it will cost.”

When our father passed away the fate of the House came into question. Faced with this reality, it was incumbent upon us to first face the challenge and continue the adventure in our own way. Our first goal was to ensure the perennity of their work, open the house to the public and facilitate the study of Antti Lovag’s architecture. The second goal was to preserve the house’s identity and ensure that it remains a place of creativity.

This is the reason which led us to open a residence that will host a guest artist each year who is invited to create a work in relation to the House’s architecture and its environment. 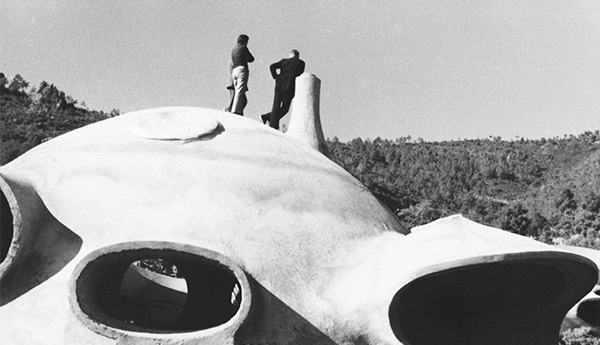 of the endowment fund

The Maison Bernard Endowment Fund’s purpose is the protection and perennity of Antti Lovag’s architectural work with Pierre Bernard in Theoule sur Mer throughout the 1970s.

Originally designed to be a family residence, today the house is one of the most successfully completed examples of organic architecture, where Antti Lovag was able to experiment with his most innovative designs for a human habitat. To meet man’s needs, this architecture assembles spherical spaces which adapt to the surrounding area by integrating the natural environment and responding to the aspirations of its inhabitants – going beyond strict rational necessities.

The Maison Bernard Endowment Fund also provides for the promotion of and public accessibility to Antti Lovag’s work. The house is now open by appointment every Tuesday from October through April. Visits are limited to groups of eight people.

The Maison Bernard Endowment Fund also hosts a resident artist each year. The selected artist is given the task of creating an original work within the context of the house’s architecture environment. The works will become a permanent display in situ. For more information contact residence[at]fonds-maisonbernard.com.